As I visit this site, I certify that I am of legal age to consume alcohol in my country of residence.
I am over 18 years old
Home → Julie Gayet

In parallel, she has an acting career and has appeared in around fifty films, directed by Agnès Varda, Laurent Bouhnik, Patrice Leconte or Bertrand Tavernier. A wine lover, Julie Gayet is, since the 2015 Spring Festival, ” Pair de la Jurade de Saint-Emilion “, an honor! 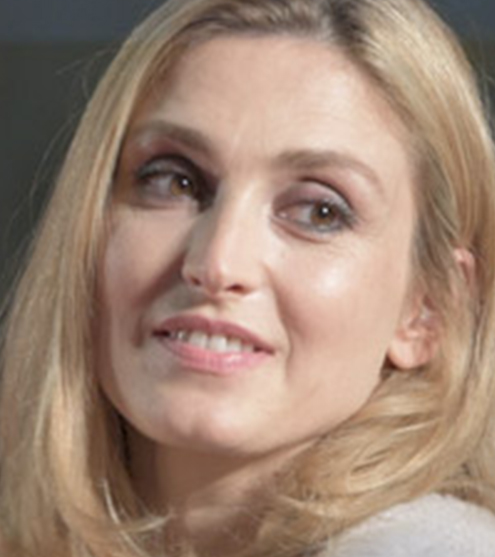 You don’t forget a first time. Julie Gayet, discovered the Saint-Emilion wines in 1996, when promoting the film Delphine 1, Yvan 0, which revealed her to the public. “I was very lucky, I went to Jacques Bertrand’s Château Côtes Carteau Daugay. We went to the cellar with Dominique Farrugia, Alain Chabat and Serge Hazanavicius, it was amazing”, she recalls with evident pleasure. Difficult indeed to imagine a better company to learn about the subtlety of merlot! Jacques Bertrand offered them a vertical tasting, consisting of discovering several vintages of the same wine. The principle is to start with the youngest vintage and to go back to the oldest. “It was my first such tasting lesson. We got through incredible years and fascinating discussions”, she smiles.

THE ASSEMBLY, AS EDITING A FILM

Inducted as Pair de la Jurade de Saint-Emilion, during the 2015 Spring Festival, Julie Gayet sees this honor as “A real responsibility. There is something very solemn to say that we are together, to defend these traditions and this history”. A great fan of red wine (” I have a wine tasting tradition in my family”), Julie Gayet likes the Saint-Emilion wines for their uniqueness and the explosion of the senses that they provide: “I go from one wine to another, I love to compare. I like the smell, it is like choosing a perfume. And then I taste and what effect it has on the palate!” The producer is particularly sensitive to the art of assembly. She draws a parallel between this expertise and the editing of a film: “There is this idea that a movie is only made by editing. For wine, the assembly is somewhat similar”, she explains. A history of technique and sensitivity, to be able to say definitively: “It’s now, this way”.