As I visit this site, I certify that I am of legal age to consume alcohol in my country of residence.
I am over 18 years old
Home → THE SAINT-EMILION JAZZ FESTIVAL MAKES ITS CINEMA! 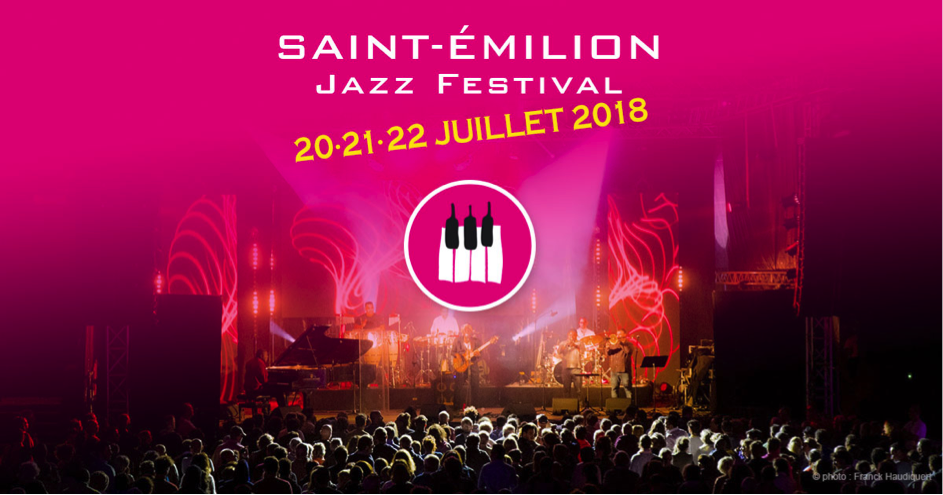 the Saint-Emilion Jazz Festival returns for its 7th edition.

This year it is on the theme of the 7th art that the medieval city of Saint-Emilion and the 130 volunteers of the festival will welcome you!

Dominique Renard, founder and president of the festival is amused by the coincidence: “The first sound film in the history of cinema was The Jazz Singer, the story of Al Jolson, released in 1927.

No wonder the organizers chose this theme to celebrate film music in all its forms!

On the agenda for the 7th edition, 3 evenings of concerts in the picturesque (even cinematographic!) setting of the Douves du Palais Cardinal.

Come and listen to the talented Maceo Parker, Cécile McLorin Salvant, Sylvain Luc, Eric Legnini, Stéphane Belmondo and the Vargas Blues Band who will animate the stage every night from 8pm!

You can also participate in many free concerts at Parc Guadet, Friday from 5pm, Saturday and Sunday from noon and discover or rediscover the talents of the regional and national scenes such as Tom Ibarra, Hanuman, The Kilometers,…

Guitarist and composer Sylvain Luc will be accompanied by the Basque choir Lokarri for an exceptional #InstantSaintEmilion. A few steps from Saint-Emilion, Château Soutard will be the enchanting setting for the Music Tasting on Saturday, 21 July.

Sylvain Luc and the Lokarri choir will share their emotions, born from the Saint-Emilion wine tasting. Come share with the musicians a pleasure of all senses where hearing a wine and tasting a music become possible!

Saint-Emilion’s ephemeral wine bar, The Place To Be at Parc Guadet

Every day, about twenty references are presented by our team of winegrowers; on Sunday you will even get the chance to discover the Coup de Cœur 2018 selected during the “Coupe des Crus”! These wines will be sold by the glass, at low prices or by the bottle at the property price.

Discover the Guadet Park program on the festival website.

Animations, for young and old!

Throughout the weekend, young and old can participate in many activities in Parc Guadet in an intimate and friendly atmosphere!

Gourmet market and food trucks where you can taste the best local products; a play area to discover the festival differently; the list of animations is long!

This year, a raffle is organized. Each evening a winner will be drawn and will win six bottles of Premiers Grands Crus Classés de Saint-Emilion.

A moment not to be missed! To open this 7th edition, an artist and great wine lover from Saint-Emilion will be inducted by the Jurade on the Douves stage of the Palais Cardinal.